Clause UHX of ASME Section VIII division 1 defines the rules for the calculation of tubesheets in shell and tube heat exchangers. This calculation is based on the Gardner’s theory (1948-1952), also considered in Appendix A of the TEMA standards (previously generally used in tubesheet calculations): however Clause UHX of ASME VIII division 1 also contains a series of additions and improvements which make this standard far more complicate than TEMA, and in many cases requires information and data not known by the mechanical designer.

The calculation rules are far more complicated in fixed tubesheet heat exchangers (TEMA types BxM, AxL, NxN), where  also the stresses due to the differential thermal expansion between shell and tubes shall be considered, and where also the shell is called to give a contribution to the tubesheet stability: in these exchangers the effect of the differential thermal expansion is converted into an additional tube side pressure when the tubes are colder than the shell, or into an additional shell side pressure in the opposite case. Also the stresses resulting from the Poisson’s effect in the shell and in the tubes are considered: in fact hoop stresses caused by pressure in these components have an effect similar to the temperature difference between shell and tubes, since they will also cause longitudinal expansion/contraction, with consequent additional loads acting on the tubesheets.

It has to be noted that since the UHX and the TEMA standards are based on the Gardner’s method, in both standards a high tubesheet thickness may be needed just to reduce local tensile or compressive stresses is some part of the tube bundle (which has very low allowable compressive stresses, imposed by the need to prevent tube buckling). In such cases the mechanical designer has no possibility to change the characteristics of the bundle (tube dimensions and baffle spacing: tube buckling stress is smaller when the free tube length between two baffles is large), because these data have been fixed by the thermal designer: therefore the only possibility to avoid an increase of the tubesheet thickness it often the adoption of an expansion bellows on the shell. Moreover, in the cases where the differential expansion of the tubes in respect of the shell is large, even very high tubesheet thicknesses cannot lead to a substantial reduction of tube stresses, particularly when the tubes are under compression: in these cases the expansion bellows remains the only possible solution.

As a consequence, the design of the tubesheets in fixed tubesheet exchangers shall be made as follows.

Formally the UHX calculation of a fixed tubesheet exchanger is valid only if both tubesheets have the same thickness and the same boundary conditions (that is, tubesheet operating temperature and temperatures of the adjoining components): which happens unfortunately very seldom. Therefore in all cases where the 2 tubesheets are in a different situation, a reasonable approach is the one to perform a double calculation, each one with the specific conditions of one of the tubesheets, taking then the most conservative design. This happens very often when the calculation of the radial thermal expansion is prescribed. Note that generally neither the thermal specification nor the user’s design specification contain sufficient data to find the “tubesheet temperature at the rim”, the “channel temperature at the tubesheet”, the “shell temperature at the tubesheet” and the “tubesheet operating temperature”, as required by UHX. The following tables are therefore a suggestion, in all cases where the user is not able to supply the data needed for the calculation (with Tint and Toutt, Tins and Touts we have indicated the inlet and outlet temperatures of the tube side and the shell side respectively). All the TEMA types of fixed tubesheet heat exchangers have been considered, for the case of a single tube side pass and for the one of several tube side passes (always supposing, as it usually happens, an even number of passes). 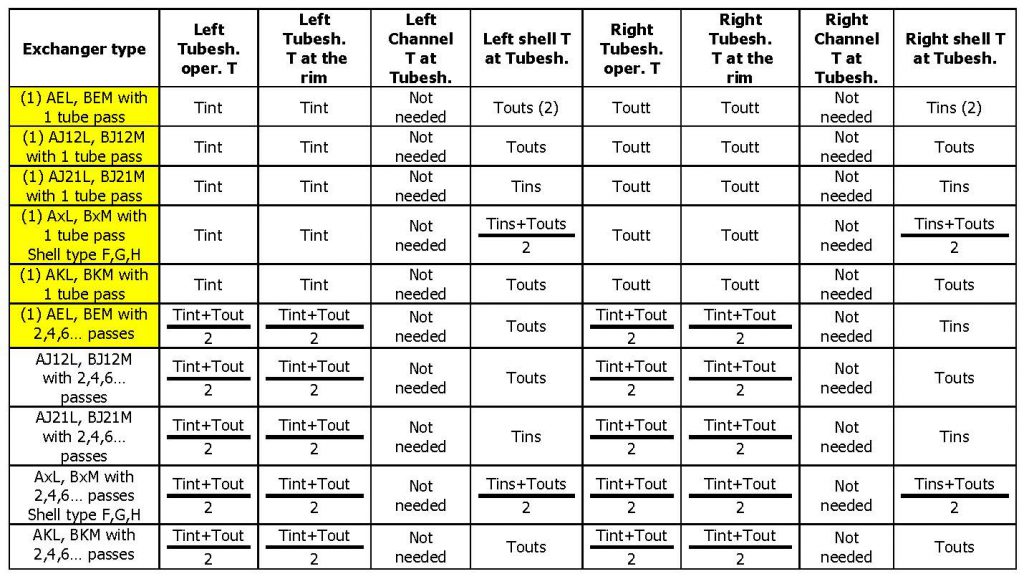 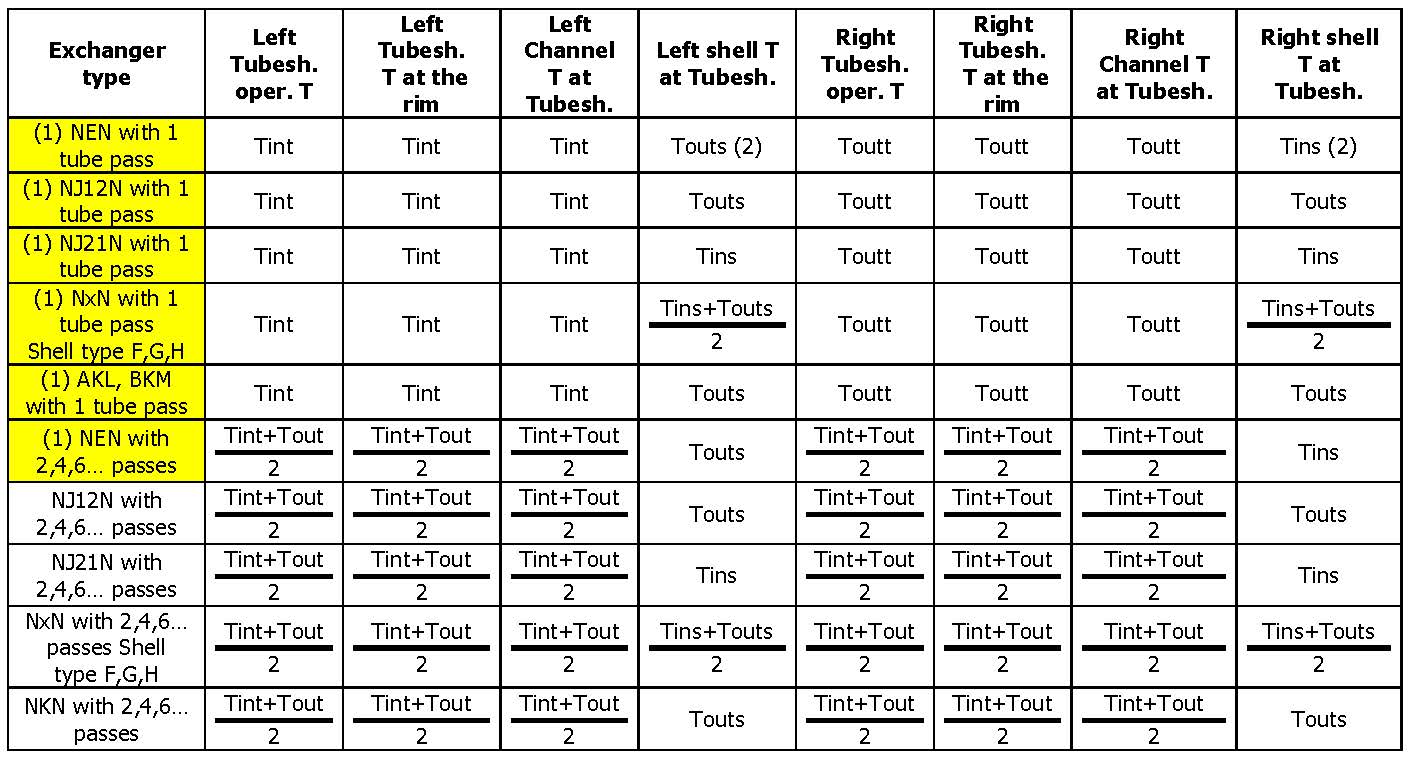